< Back to Our Commitments

With a firm belief in sustainable development, KEPCO Philippines has made responsible environmental practices as one of its top priorities in its business operations. Environment-friendly systems are put in place to protect the surrounding communities of the plants.

The Ilijan Combined-Cycle Power Plant boasts of being one of the cleanest power sources in the country. By utilizing the most modern technology and fueled by natural gas— which is regarded as the cleanest of all fossil fuels — the plant is very much in the forefront of efforts to promote sustainable and ecologically-sound economic development through the delivery of clean power.

Pollution control safeguards are employed in the Malaya Plant in order to protect the ecosystem. Structures and devices designed to shelter the environment such as the wastewater treatment plant, rehabilitated tank farms, a smoke density indicator, an oil-water separator, a sound arrestor and a multi-cyclone dust collector were set in place. 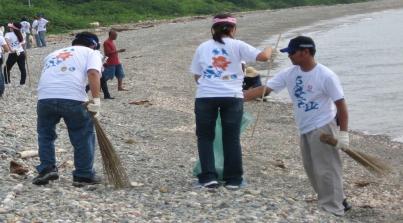 In coordination with the Philippines Government, KEPCO Philippines-through KEILCO — has also established a monitoring scheme that tracks and screens the local watershed, coral reefs and plant emissions as well as the social impacts in areas where it operates.

Rigorous monitoring of the coastal areas where the plant operates ensures that marine wildlife, such as the pawikan or sea turtle, remain unharmed.

Together with other stakeholders, KEILCO officials and employees also conduct a monthly "Coastal and Underwater Clean-Up Program" in coastal areas near the Ilijan power plant in Batangas City.

To support the livelihood of local fisherfolk, KEILCO also launched a "Giant Clam Seedling Program" in Barangay Ilijan which resulted to a more bountiful sea harvest for the residents.

In Mt. Sembrano in Pilillia, Rizal near the site of the Malaya Thermal Power Plant, the KEPHILCO Mountaineers Club headed by the company's Vice-President planted 150 trees to help restore the area's forest cover.