< Back to Our Commitments

KEPCO Philippines is committed, not only to the enhancement of the bilateral relations between the Philippines and Korea through its role in the energy sector, but more importantly, to improving the lives of Filipinos, especially those living in the poorest communities.

KEPCO Philippines’ first energization project in the Philippines was coined “O, ilaw.” This project, which was made in partnership with the Department of Energy, energized 60 barangays in Oriental Mindoro.

With the common goal of bringing progress to even the farthest reaches of the country, KEPCO Philippines, in partnership with the Philippine Government, continues to provide electric power to communities that have never been energized before.

Thus, from 2001 to 2010, KEPCO Philippines has already electrified a total of 760 barangays, for a total cost of 14 Million US Dollars.
As KEPCO Philippines aims and reaches higher in the energy industry, the company remains firm on its commitment to sustainable development, consequently fulfilling its mission of uplifting the lives of the Filipino people. 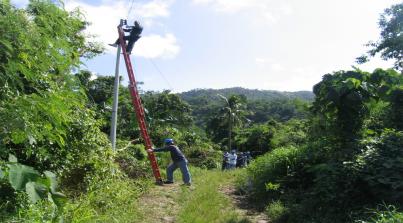